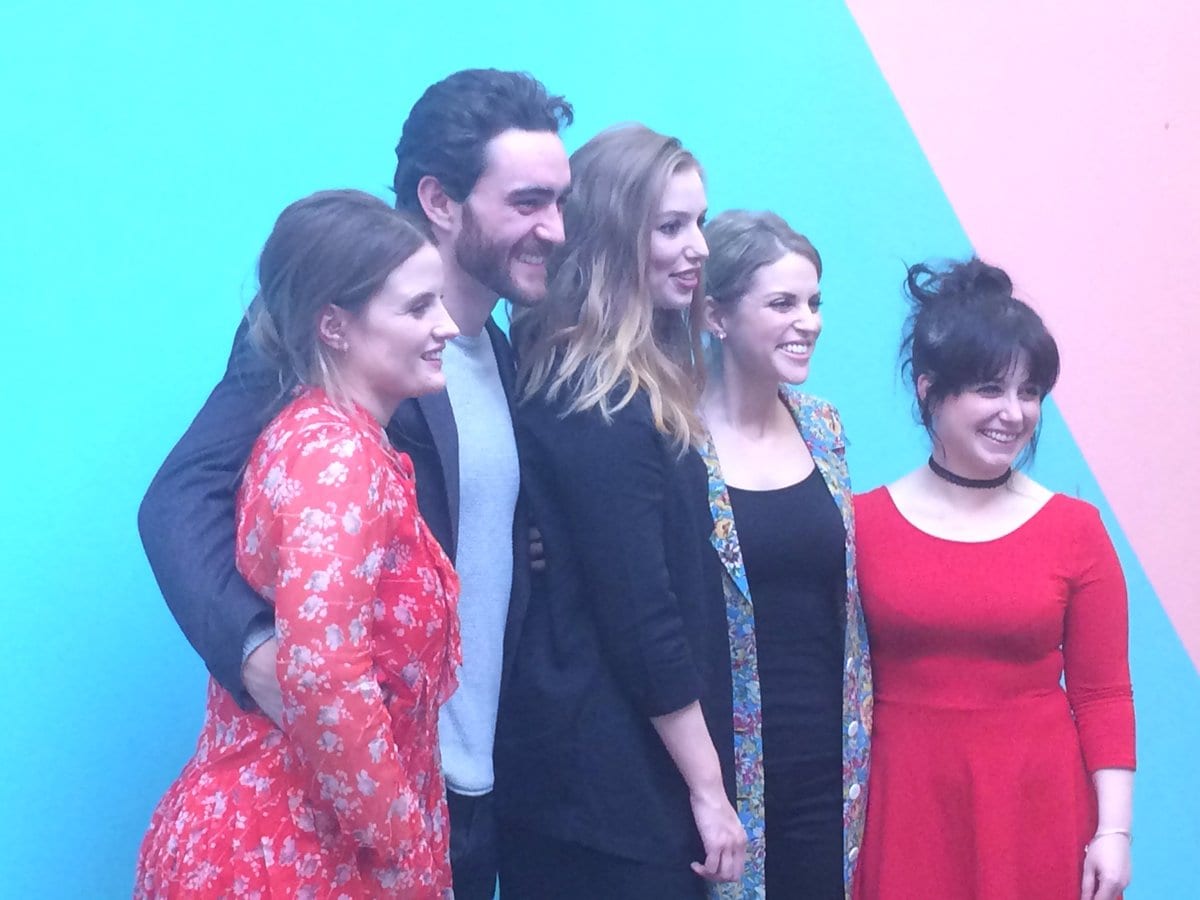 Can’t Cope Won’t Cope’s Lorraine (played by Sheila Moylette) is our Lady of the Perpetual Cardigan, as glamorous as a Hoover, and riotously funny, writes Terry Prone Irish Examiner Ltd. . 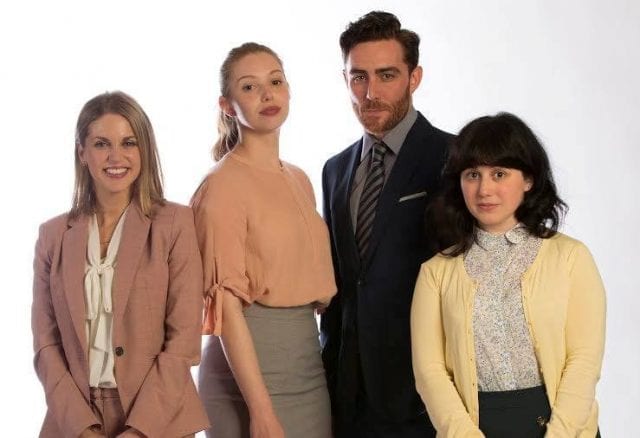 CARDS on the table. We love Lorraine. Lorraine is our new best friend. We adore her. Admittedly, we’ve met her only twice. Fleetingly, at that. We don’t know her surname. Don’t know where she’s from. Not that sure what her job is, although it’s in something financial. Just know she has to stay.

I mean, just look at her. Not two hands higher than a duck, she is, with a pudding-bowl fringe on her and a roundy pop-eyed face filled with self-righteous curiosity. She’s so prissy from first sighting, you just know she’s going to drink green or peppermint tea when everybody else is stiffening themselves with double espressos. It’s no surprise that when the entire staff of the office where she works go to a nightclub and are knocking back shots like an ad for instant alcoholism, she’s sitting in the middle of them all, solemnly drinking milk. Because it’s healthy.

Never mind the ostensible stars of RTÉ’s new comedy drama, Can’t Cope Won’t Cope. Sheila Moylette, who plays Lorraine, is the real star, sitting at her desk bouncing on an exercise ball, eating basil leaves and disapproving of the reckless and borderline crooked behaviour all around her. Aisling, the girl who sits in front of her, draws a sober breath only under protest and their boss, Kate, played by Amy Huberman, is so driven by her own career advancement that she has the charm and ethical core of a basking shark.

It is inevitable that when one of their major clients, a film star, gets suddenly killed in an accident, all the Amy Huberman character cares about is tying down the millions he was about to invest in one of their funds. As Lorraine watches, Aisling and her boss compete to pour faux-sympathy down a transatlantic phone line in order to get the investment confirmed. When they succeed, it’s immediate high-fives and promises of celebratory lunches on the company.

“Is this not all a bit immoral?” Lorraine asks. Kate promptly threatens to burst her exercise ball. After an interval, the girl makes another attempt to get the others to see the error of their ways.

Lorraine — in a basil-fragranced sulk — bounces in silence. The minute Kate uttered it, you just knew that the phrase “Shut up, Lorraine,” would immediately become the preferred dismissal phrase for the worthy but tedious.

It has to be said that this particular TV series has a serious shortage of the worthy but tedious. It’s about two Cork girls who, having been friends forever, move together to Dublin in their early 20s. One of them — Aisling — is a wealth manager. The other — Danielle — is an art student. We learn early on that Aisling is hugely successful and filled with potential, whereas Danielle is an uninspired loser patronised by the most pompous art teacher who has ever lived. The pleasing house they rent together has a slightly foggy Celtic soft focus about it. Not that they spend much time in their house. This is not a couple of pals who play or listen to music, read books, discuss political ideas, or make plans to walk the Camino in search of booted epiphany.

Their careers are minor, compared to the urgent imperative of getting to Copper Faced Jacks, getting legless in Copper Faced Jacks and recovering from getting legless there. It’s all bright lights, booze, and a particularly unpleasant motor mechanics version of sex which Aisling gives no indication of enjoying and which lands her in the pharmacy the next day for the morning-after pill.

The writer of what is carefully designated a “comedy drama”, Stefanie Preissner, has been credited with being the voice of her generation, with the rider that the series is reminiscent of Edna O’Brien’s The Country Girls. Preissner is the voice of her generation according to her peers on Twitter, large numbers of whom have sprung into print to recall nightclub binge drinking akin to what they’re seeing on screen. Although that’s flattering, Preissner’s witty interview on The Late Late Show suggests she is way too smart to want to be the voice of such a reductive sad lot.

It is interesting, however, how many of the generally male TV critics who are less than bought in to the series, have covered themselves up to the gills before any negative comment, announcing that they know they’re not the target demographic of the series. Intriguing, that. Since when has writing been age-specific? Seventy year olds loved Harry Potter. The 16-year-old daughter of the man who lent me his box set of The West Wing adored the series.

Good writing engages despite age. Great writing reaches across time and space to move the reader and to convey the impression documented in the Aretha Franklin song, that the singer is telling her life in his words, even though they’ve never met.

The Edna O’Brien link intrigued me enough to go back to the shelves, take down the paperback and read it again. Similarities are certainly present. Two country girls come to the city as part of their growing up process. They behave badly enough (in the case of the book) to have got it banned, back in the day, but in the current context, their misbehaviour is so mild, it wouldn’t interrupt the rhythm of Lorraine’s bouncing exercise ball for even a minute.

The most obvious difference between Aisling and Danielle on the one hand, representing the 21st century, and Baba and Cathleen on the other, representing the not-so-swinging Irish ’60s, is the first two are well educated, whereas O’Brien’s characters are not. Whereas Aisling is so third-levelled that she bridles when her company offers her the chance to upskill and gain another qualification, the height of Cathleen’s ambition is to be a grocer’s assistant, and even that ambition is wished on her by her father.

Another contrast is that between the massive alcohol consumption of the Can’t Cope Won’t Cope girls and the relatively mild imbibing of O’Brien’s, supporting the RCPI thesis that whereas cirrhosis of the liver used to be a disease of old men, it’s now, in this country, a disease of young women.

Quite different, too, is the focus of the two sets of characters. While both pairs want to have a good time, O’Brien’s yearn to be taken care of by men, preferably much older men. Preissner’s, on the other hand, seem to be uninterested in men, to the extent that Aisling and Danielle dump a presentable if amoral specimen of manhood in order to go to Dollymount Strand to engage in voyeurism.

When the second series is commissioned, as it undoubtedly will be, one has to hope that the two currently central characters slide to one side (in Aisling’s case, straight into the Rutland Centre) and that Lorraine comes into her own. Bouncy Girl is a bit like Rhoda in the old Mary Tyler Moore series: much more interesting than the sweetie-pie heroine, odd as two left feet, and inescapably worthy of an eponymous series.

She’s Our Lady of the Perpetual Cardigan, as glamorous as a Hoover, and riotously funny. Please, RTÉ, can we have some more? 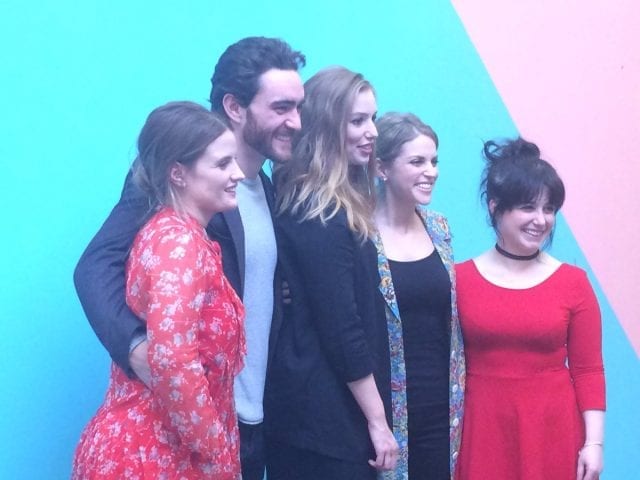 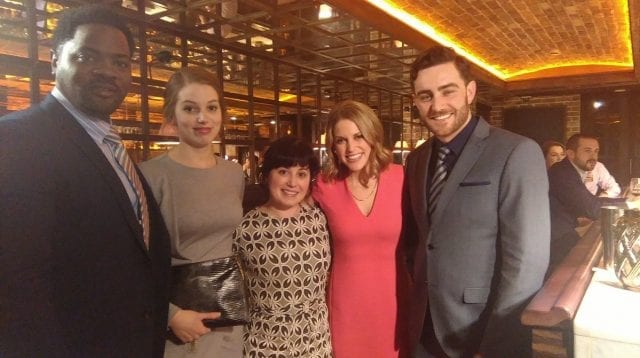