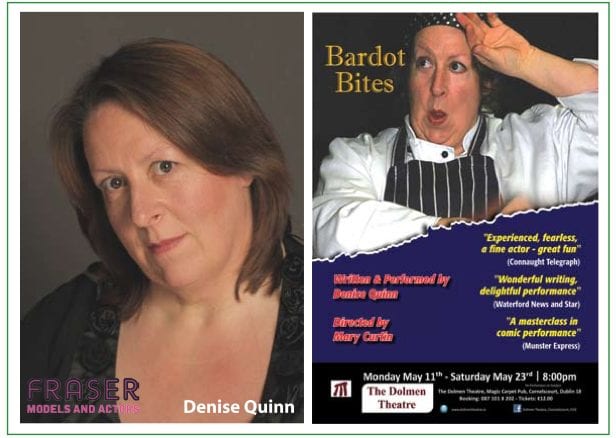 An Evening with Denise Quinn

An Evening with Denise Quinn

Denise is working hard in rehearsals for “Bardot Bites”….don’t miss it. Get your tickets now for the performance in The Dolmen Theatre , Monday May 11th – Saturday 23rd May.

In this hilarious Comedy, Bardot Bites, penned and performed by Denise, we meet middle-aged Bid who has spent her life caring for her ailing mother while firmly under the thumb of her older sister Francine ‘The Beauty Queen’. When Mammy dies, Bid is catapulted by Francine into the world of work where she meets twenty-one year old cousins Leandra and Leonie who educate Bid in the ways of the world and particularly the world of men and romance. Under the none too gentle tutelage of Leandra and Leonie, Bid embarks on a journey that sees her come to grips with the dating game while struggling to deal with the financial fallout of Mammy’s death and the bullying avaricious Francine.

Denise is an award winning actress has successfully toured this play nationally and internationally. The play has wowed audiences and critics garnering rave reviews. The Connaught Telegraph critic in a review described it as ‘top theatre’  ‘huge, moving and funny’ and lauded  Denise’s performance as ‘experienced, fearless, subtle and great fun’

So don’t miss out on a great night’s theatre 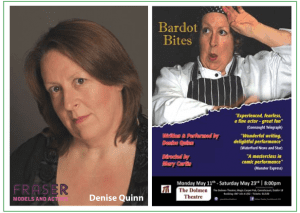