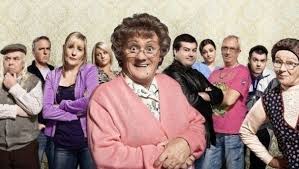 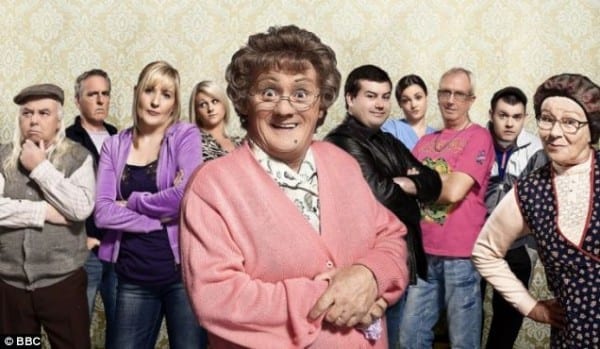 From the small screen to the big screen,  its finally here –  ‘Mrs Brown’s Boys – D’Movie’ which was shot on Dublin’s Moore Street earlier in the year.  This is what Frasers actor, Joan Thorpe, who has a supporting role,  has this to say about filming it:

“Mrs. Brown’s Boys D’Movie. Did I have a great time on set? No. I had a feckin’ great time. Three days rehearsal and two days filming in Smithfield market area. We were like Mrs.Brown’s feisty female army, marching to save Moore St. The song we danced to, which I presume will coincide with the Movie release, will be an anthem song or I’ll eat me thermals and long johns (wore these on one of the colder days, well concealed under me pinny). Brendan O’Carroll – Mrs. Brown to you, is funny 24 a day and in between takes, the shouts from locals ‘How’ya Mrs.Brow-win’, had him running over for photos and hugs and we got hugs too. Greek St. flats courtyard scene – priceless!

He showed us his bloomers, very personal. Jenny and June Rogers and Buster and muscly men throwing their sacks – you’ll have to wait and see! And not to mention Leigh Miles and Ian’s fab choreography. A week of physical hard work and enjoyed every minute, like a big happy family we were” -Joan Thorpe 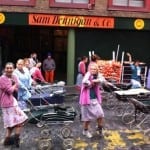 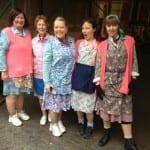