“It’s not that often you get the play the bad guy….”

Ronan Oertzen ~ “I had so much fun filming , its not that often you get to be the bad guy and just mess around..haha. This was my first time on a music video set and I loved it, it was a great experience. There were a few days of filming which where pretty full on, I take my hat off to the crew. One day we worked from 9am until 11pm and believe me, its much easier for the actors than for the crew. Everyone in the cast was really cool and I learnt so much. I remember for the last scene and I was being taped down to the table one of the crew asked me was I ok as the table was really cold..…I said are you being serious, have you ever surfed in Ireland in January when you can’t feel your face!!
And at the end when it was all done we all went out into Dublin city and ended up in the basement of the Irish film institution, watching the Oscars until 6am. I could get used to this haha
Cheers Frasers for getting me this and everybody at Failsafe films for doing an epic job.” 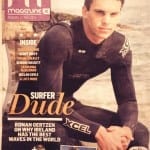